On Learning How to Stand Still

My Grandfather had this thing where he could never stop working or sit still unless he was reading the newspaper, watching the evening news, or eating dinner. Apparently, that gene has been passed along, because that's exactly how I feel, only for me it's where travel is concerned.


Not traveling is one of the hardest things I've ever done, and every time I enter a non-traveling phase of my life, it requires a huge adjustment on my part. To shift from exploring and wandering the world to washing laundry, cleaning the kitchen, and refereeing arguments is like trying to pin down a 100-ton giant to check on his teeth.
"But this is good for you!"
"The hell, it is!"

It was in this state that my friend Jenny found me when she came to visit at the end of last month.


"Gosh, Liz, I remember you as being much more laid back while you were in Dubai. You really seemed to be enjoying life and parenting while you were there." 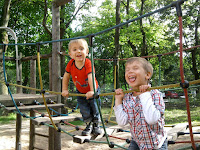 So what does that mean? That I am incapable of settling down? That I am, or - perhaps more importantly - my children are destined for a nomadic lifestyle?


Well, my husband thinks not. He thinks he is ready to "settle down" here, in the very area where he grew up. He thinks it will be good for us, and good for the children. And while I agree, I feel like I'm standing in the middle of Sydney without a road map. How on earth do I get to the harbour from here?
To distract myself from the task at hand, I embark on spontaneous mini-adventures on any given week. 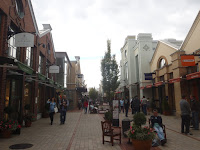 Last week I packed up the kids and headed out to the American-style shopping outlet in Ingolstadt, and this week I participated in my very first book club meeting in the incredibly beautiful "Schoppershof" neighborhood of Nuremberg. What I'd come to find out is that Schoppershof is well known for it's princely manors, or "Herrensitze". What a lovely surprise! 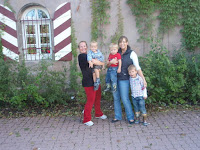 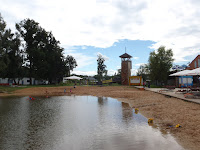 The week before I was playing host, and doing a terrible job at it. What I quickly realized is that an unhappy hostess makes a poor hostess. Though I tried to create the illusion of everything being "hunky-dory", being a single parent while also in a state of non-travel meant that I was "not myself". Nevertheless, I tried to show her around, though Jenny the Sandcastle Girl is not your typical, take-me-to-the-place-where-the-Japanese-tourists-are kind of visitor. So we went to one of my favorite local playgrounds (on charming Bohlenplatz) in the nearby city of Erlangen, explored the indoor and outdoor play areas at Nuernberg's child-focused Tucherland, unwound in a traditional Franconion biergarten (we chose the historic Tucherhof biergarten, which also happens to have a great playground!), had some traditional German fare in Munich's lovely Marienplatz, and let the kids be kids at the fabulous visitor park at Munich's airport. 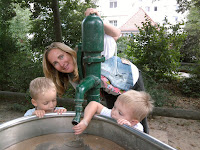 Though Alexander and Jenny's son, Adam, fought like gladiators when given the chance, I'm so thankful that they came out for a visit, and hope that I prove to be a more relaxed hostess, should she decide to one day return. In addition to the company, having visitors forced me to get (further) out of my element and try new things... hence Tucherland, Tucherhof, and visitor's park at Munich Airport, which I love! Now if I could just learn how to stand still...
Posted by Liz Kraft at 9/10/2010 06:53:00 AM