Walk in My Shoes Wednesday - Magical Moments in Bamberg 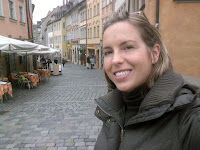 Several times a week I drink out of one of my favorite coffee cups, and on it is printed a quote that I try to live by, "Go confidently in the direction of your dreams! Live the life you've imagined." Since the life I've imagined is one where I visit magical cities across the world for as long as I'm humanly able, I cannot explain why it's been nearly a year since we moved to Franconia, and yet we've managed to visit Bamberg's masterpiece-of-a-city only once in that time.
Fortunately, that's easy enough to change. Here in Germany, you drop the children off at the Kindergarten, hop in the car, jump on the Autobahn, and before you know it you're in another fabulous gem of a city. 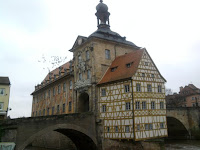 And so it was that I found myself meandering the narrow cobblestone alleys of Bamberg this week, breakfasting in a half-timber café whose walls leaned precariously into the banks of the Regnitz and snapping photos unabashedly of the familiar old city hall -- from every conceivable angle.
Though I find both Nuremberg and Bamberg to have stunning profiles from a distance, there's a saying here in Germany that's quite fitting, "Wenn Nürnberg oder Frankfurt mein wäre, wollte ich's in Mainz oder Bamberg verzehren." Literally translated, it means "If Nuremberg or Frankfurt were mine, I'd want to consume Mainz or Bamberg." 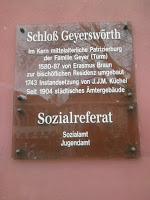 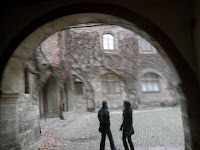 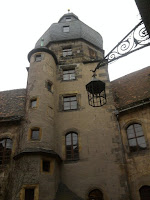 It's no exaggeration to say that, for some, the places in which we do not reside, these are the place which capture both our hearts and minds. Enter Bamberg. A place where every street corner seems to reveal a deep and beautiful secret. Where else can you find a city welfare office that has taken up residence in an old castle? In Bamberg. Where, even if you just walk, you're bound to stumble upon something magnificent.
Posted by Liz Kraft at 11/18/2010 09:22:00 AM