New Year's Eve... Around the World 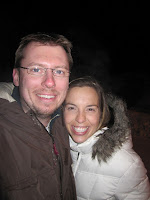 New Year's Eve has always been a bit special for Tobi and I. With the kids sleeping soundly in their (correction, our) bed, I have time to reflect back on the many celebrations in various corners of the world.

Thinking back, there was our first New Year's together, which we spent at the Berlin Philharmonic back in 1999, the dramatic fireworks display in the Rocky Mountains during our honeymoon trip to Ouray (Colorado), an odd "Silvester" Celebration - at a spa in Bad Griesbach - on the heels of a traumatic Christmas-time miscarriage, and a New Year's in Sydney -- overlooking the stunning Sydney Harbor. And then came the children. Though we've modified our New Year's celebrations a bit, we still try to make a bit of an event out of it. From enjoying a traditional "braai" and watching fireworks go up over the Seal Island in South Africa's Mossel Bay, to celebrating with friends in nearby Heroldsberg, and partying Dutch-style in the tiny Zeelandic town of Oudelande, it just seems to keep getting better. 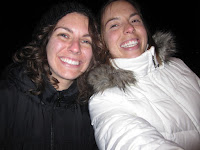 Tonight we kept it simple for the first time in ages. We celebrated with my sister, eating traditional German New Year's "Raclette" (okay, it's actually Swiss, but the Germans have adopted it as their own), then headed out into the street to set off our own fireworks. Some neighborhood friends came by with their kids and while Lukas covered his ears for the first few explosions, Alexander laughed loudly like an evil scientist plotting to take over the world. :) Truth be told, he's been doing that hearty laugh now for a few days and we just can't get enough of it. 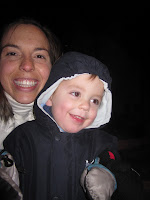 And another thing that Alex has been doing lately that I really must mention here -- he's dead-set on two of everything. Two chocolates, two donuts, two drinks at breakfast time. Why? He gets great pleasure in being able to present his big brother with something he knows Lukas will like. How cute is that? 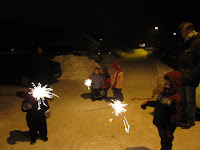 After the fireworks we let the boys play a bit, then brought the little guys to bed. By this point, Lukas was slightly hysterical, and Tobi leaned over and told him that there was one last thing that had to be taken care of... and it was kisses on the belly for the last time this year! So cute. Then I did it to Alex, and Alex insisted on blowing loudly on my tummy before he went to sleep.

As I sit here in my PJs, catching up on blog entries and enjoying chocolate ice cream from a local farm, I don't miss the glamorous New Year's celebrations of yore. Life is good, and we have much to be thankful for in 2010. What surprises will 2011 hold? 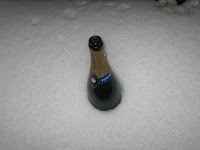 But wait, I can already reveal the first surprise! It was a neighborhood block party at the strike of midnight, where we had the rare opportunity to talk with neighbors in the snow, our champagne bottles chilling in the snow banks at our sides. Germans love their fireworks and they set them off with zeal at year's end, and what a show can be, even in the smallest of villages.
So this spontaneous New Year's adventure ended on an unexpectedly fun note. Sometimes not planning is the key to having a memorable journey... near or far. Happy 2011 to you and yours!
~Liz
Posted by Liz Kraft at 1/01/2011 02:00:00 AM