Walk in My Shoes Wednesday - Lauf an der Pegnitz

"Lauf an der Pegnitz", a city hidden in the far-stretching shadows of Nuremberg (its older, more worldly sibling) is a village in Middle Franconia with about 30,000 residents. Literally translated as "Walk on the Pegnitz", it's hard to say what it's founders were thinking more than 600 years ago. 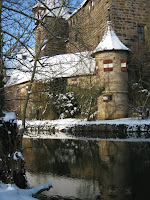 I took my sister here, along with the kiddies, to show her something off the beaten path. Apparently I was oblivious to the fact that - on this day - any path we chose would be particularly cold and icey. Part of Lauf's charm is its shop-lined pedestrian area, which provided us with plenty of refuge from the cold when we needed it most (i.e. the ever-popular german chain Tchibo, where you can get coffee, undergarments, and home goods in one nifty spot). But Lauf has also aged fabulously, making its moat-lined castle and stunning Nuremberger Tower medieval eye candy for architectural buffs (or Americans such as ourselves, who find structures dating back to the early 1900s ancient and historic). 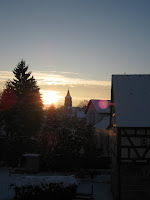 For a mid-afternoon snack we popped into the Markt-Café on the old Marktplatz (just past the old city hall or "Rathaus"). We ordered a medley of cakes (all of them delicious) and while I sipped on a steamy cappuccino, my sister warmed up with a chocolate stout.
Once feeling had returned to our toes and fingers we headed back out into the cold, wandering through more cobblestone streets before reaching the city's picturesque river. It was there that ducks convened by the dozens, anxious to wish us off as we neared our starting point. Naturally, the boys returned the farewell as only boys do, chasing them into flight and giggling at their victory.

I hoped you enjoyed our stroll through Lauf an der Pegnitz as much as we did. Perhaps your tour was even more pleasant, without jack frost nipping at your fingertips. ;) Lauf is a lovely city, and I'm happy to be able to share it with you.
Posted by Liz Kraft at 1/06/2011 10:09:00 AM