Our Life in "KW" - The German "Kalendarwochen" Concept - Part 2

While composing the last entry, I realized that its length was making it difficult to digest in a single sitting. So for your reading enjoyment, our adventures for "Kalendarwochen" 49-52 will be listed in this posting. They're less about exploring the unknown and more about a multi-cultural family's attempt to establish holiday traditions.

And, in case you missed the last bit it began like this: "As I was considering how to make up for my recent absence from the blogosphere, the thought occured to me that I could introduce you to the german "Kalendarwochen", or "Calendar Weeks" concept. Otherwise known as "KW" (pronounced "Ka-Vae"), in this corner of the world they often organize their lives according to the weeks of the year, and what better way to cover all of this missed time?"

To read about the month of November, click here. Or to see what we were up to in December, just read on...
Week 49: PAR-TAY!
Organized and attended our "English Without Border's" Christmas get-together at a quaint old restaurant in the historic district of Erlangen; had a blast at the International Women's Group's (or IWG's) annual Christmas Party at a nearby castle.

Week 50: Cookie Exchange and Nuremberg Christindlesmarkt
Attended (and baked for) the IWG's annual Christmas Cookie Exchange in Herzogenaurach. Etched into my memory: The BBC's "Rocky Road Christmas" and hostess Petra's incredible homemade eggnog. Later that week I braved the mega-crowded Nuremberg Christmas Market with three little kids. How? Baby Emma was strapped into the Baby Bjorn, which freed up both of my hands for her 3- and 5-year-old brothers. :) Loved the "Kinderweihnachtsmarkt", or "Children's Christmas Market", and was impressed with the boys for helping me do some last minute Christmas shopping along Nuremberg's fabulous Karolinenstrasse (listed here as the city's top shopping district: http://en.wikipedia.org/wiki/List_of_leading_shopping_streets_and_districts_by_city) 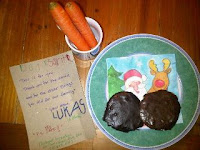 Week 51: Countdown to Christmas!
When we're in Germany, we celebrate like this: Christmas Eve we always do dinner at my in-law's, and the kids love opening gifts brought by the "Christkind" (literally translated as"Christ Child"). Before going to bed the boys write a letter to Santa Claus (with my help) and prepare a plate with homemade cookies and some carrots for his reindeer. Then Santa's self-appointed elves set to work wrapping any remaining presents, followed by last minute decorating and answering letters to Santa's biggest fans. Christmas morning we're up early having some hot cocoa while opening presents and stockings. On the afternoon of the 25th we have friends or family over for a big, American-style Christmas day meal (this year our friend Claudia came by with her partner and children). Lastly, on the 26th, known here in Germany as the "Zweite Weihnachtstag" or "Second Christmas Day", we have my in-laws over to our place for a traditional German meal. The days leading up to Christmas are always stressful, but once it has begun, we all tend to enjoy the holiday! :) 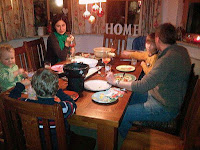 Week 52: A small-town New Year's
This year we'll be celebrating New Year's by inviting over some friends, who also have three children, for fondu and fireworks. The only drawbacks: the absence of snow make it less magical than the New Year's past, and I'm always slightly freaked out by the crazy rocket-launching and fireman-grade fireworks that are set off by family, friends, and neighbors. Duck! 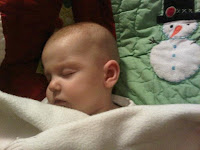 Here's to hoping that our 2012 will be equally full of incredible adventures, including those here at home, where baby Emma will be exploring her new world and learning how to eat, crawl, walk, and talk! Wishing you and your family a wonderful new year!
~The Krafts