Our Life in "KW" - The German "Kalendarwochen" Concept - Part 1

As I was considering how to make up for my recent absence from the blogosphere, the thought occured to me that I could introduce you to the german "Kalendarwochen", or "Calendar Weeks" concept. Otherwise known as "KW" (pronounced "Ka-Vae"), in this corner of the world they often organize their lives according to the weeks of the year, and what better way to cover all of this missed time?

This week being the last of the year, makes it number 52, and since my last posting was on November 4th, or week 44, I have about 7 weeks of "Wandering Family" adventures to share with you. :) Let's get started!

Week 45: Catching up with the International Women's Group
Once a month I organize an English Language group for the International Women's Group which we call "English Without Borders". This week we met at the Kalchreuther Bakery in Neunkirchen am Brand to speak english and catch up over a traditional German breakfast. It's also the week that my sister arrived from America, the week of my 34th birthday (which I celebrated with friends and family here at my home), and culminated in my sister and I being invited to a lovely Italian women's home for a tapas-style party with women from around the globe (Macedonia, Germany, Italy, the Phillipines, South Korea and the U.S.).


Week 46: Exploring Tobi's roots
Tobi's father comes from Hetzles, a tiny town about 10 minutes's drive from us. If you like German villages filled with half-timber buildings, you'd love Hetzles, which is why it happens to be one of my favorite spots to take visitors. We headed out with my sister on a cold Autumn day in search of the childhood home of Tobi's father, and found it. Now a barn, it's a tiny half-timber building which Tobi's father's family rented prior to building their own home around the time of the second world war, and - though it's fallen into disrepair - I find it cute and somewhat intriguing. We also wandered down the village's main street, chatting with random locals about their leftover pumkin displays, a somewhat icky cow stall, apple and pear orchards, homemade schnapps, and the history of Hetzles.

Week 47: Franconian Treasures - a walk through UNESCO-Heritage Bamberg and coffee with friends in Nuremberg 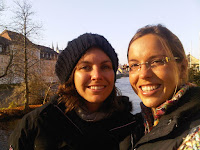 Highlights of this week included wandering around the gorgeous UNESCO-Heritage city of Bamberg with my sister and baby Emma, and meeting a friend for coffee along the Pegnitz River in the pedestrian area in Nuremberg. While in Bamberg, we especially loved popping into tiny shops along cobblestone streets for Christmas presents and decorations! My favorite find: the tiny bookstore just near the bridge leading to the old city hall. Other high points: Enjoying a big Thanksgiving dinner here at home and celebrating the 11th anniversary of our wedding with a night out at the movies. Movie of choice: "Eine Ganz Heisse Nummer" - a popular German flick with several much loved actors about three women who begin a phone sex business (in a small town - HA!) to save their convenience store. It's great to be able to watch foreign films and fully understand them. Makes living abroad even better!

Week 48: Rothenburg ob der Tauber, Regensburg an der Pegnitz, and Passau (which is on the Danube, Inn, AND Ilz Rivers) 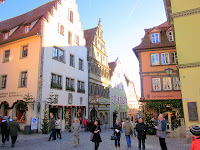 Before my sister headed back to America I was determined to show her around a bit. And I owed her one night at a castle, as a belated birthday present. Reservations were made at the "Hotel Schloß Ort" in Passau, and to get there we had to travel through Regensburg. As we piled into the car, it occured to me that I had already taken my sister to Regensburg last year. Rats. I wanted to introduce her to somehing new and incredible, and wondered what else I could show her in the area prior to arriving at our Passau hotel. Then I remembered Rothenburg ob der Tauber, and new it wasn't far from our home. I plugged it into our navigation system and we were off. Rothenburg is without a doubt one of Bavaria's most beautiful, well preserved Medieval cities. Which explains why it's also so dreadfully overrun with tourists. We wandered through the crooked cobblestone streets, had some delicious traditional German food in a leaning, half-timber-housed restaurant, pushed our way through the shockingly overcrowded, yet somewhat charming Christmas market, then headed back to the car, castle-bound. The navigation system revealed that the Passau trip had gone from two hours to three hours, which meant that Rothenburg was in the opposite direction. Oops! I had had a truly blonde moment. Once we finally arrived in Passau we had a great time, and some highlights were: staying in castle "Schloss Ort", visiting the Passau Christmas Market, overeating at a cute little Italian restaurant, gawking at the interior of the gorgeaous yet gaudy cathedral, warming up at a Vienna-style coffee house, walking along the picturesque riverfront, and taking in the view of the city from the hilltop fortress. We did end up stopping in Regensburg on the way home for lunch, an incredible Hungarian pastry, a walk along cobblestone streets, and a quick stroll across the old pedestrian bridge spanning the fast-flowing Pegnitz. What a trip, what a week! :)