Weekend 1 of 7 - Rugby & Lunch in Albertinia 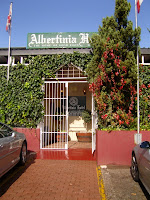 I've learned that Rugby is a tremendously violent sport. Apparently, it is entirely possible to get brutally injured within the first minute and a half of the game (if that!). Which is probably why Deoni says that she's never understood what people see in the sport. "Well I do!" I answered. "Look at the rugby players!"

In my opinion, any sport where huge men run around in teensy shorts is worthy of spectators.

And just like the male spectators anywhere else in the world, South African rugby fans can get quite worked up during a game.

When all things rugby had ended, it was time for dinner. Bean Soup, followed by a hot meat and vegetable stew (pronounced Poy-tee-kose, but I have no idea how that's written). This traditional South African stew is cooked in a huge iron pot over a (usually indoor) fire.

For desert we had some sort of diving ginger dough pudding, which was served warm. Lekker!

As if we hadn't indulged enough on Saturday, on Sunday we met friends in the neighboring town of Albertinia for a very popular Sunday brunch at the town's hotel. The streets of Albertinia were empty, but the restaurant was full, as the brunch is very popular with the locals from both Mossel Bay and George. Some of the South African delicacies included Ox Tongue, Pork Neck, "Lamb" (which was actually mutton), pickled curry fish, and tripe (stomach). There were some more cosmopolitan dishes as well, such as roast chicken and veggies, bean soup, and a really yummy bread which translates into "Grandma's Bread". It was definitely an experience! Lukas got a kick out of the little Albertinian boys running around (whose parents probably worked there), and the big lazy cat lounging by the fireplace. Service was both friendly and fast, and were honored to be able to dine with the locals in this little secret spot.

On the way home we saw a full rainbow, stretching from one side to the other, and I was reminded of how little time we have left here. Only six weekends remaining! By counting down, I think I'll be more conscious of how quickly time is passing. I hope we can make the most of our remaining time!
Posted by Liz Kraft at 5/21/2007 06:51:00 AM