The Eighth Wonder of the World?

So much for plans. I don't know why we bother making them in the first place. :-)

Forget the little farm in Imkerij-Poppendamme with fresh honey and candles made from bees wax (we now know that they're closed on Sundays), forget the evening visit to Antwerp's Christmas market (Tobi suggested we do it next weekend due to the rain & wind).

Instead, we drove through the Zeeland countryside, admiring the sunshine and blue skies (their 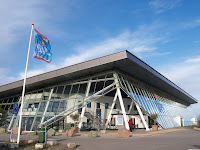 rarity here makes them all the more special), and ended up at Deltapark Neeltje Jans, a water theme park built on and around the area's famous "Eastern Scheldt Storm Surge Barrier". Wikipedia states:

The Oosterscheldekering [or Eastern Scheldt Storm Barrier] is sometimes referred to as the eighth Wonder of the World, and has been declared one of the modern Seven Wonders of the World by the American Society of Civil Engineers.

We didn't spend nearly enough time exploring the facility, and although it was a nice introductory visit, I was quite disappointed that the 3D film and guided tours are only offered in Dutch (unless you're with a group and arrange the tour ahead of time). What a pity! The film offered to English and German speakers was created in the early 1980s and was very dated... time to invest in a new one, I'd say! We did enjoy visiting the family of seals, though, who seemed to put on a bit of a show when we stopped by to say hello (below). 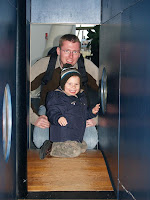 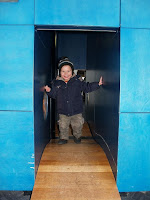 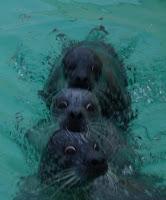 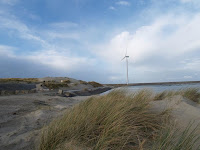 Just next to Neeltje Jans is an incredible concentration of windmills, built beside the rolling grassy dunes at the North Sea's edge. They're modern windmills (also known as wind turbines), made of some sort of flexible fiberglass material, and their blades bend with the wind in a petal-like fashion. I never realized how incredibly graceful modern machinery could be. Each blade is angular, allowing the operators to turn them mechanically into the wind, and watching them turn, at the awesome height of 30 stories, is nothing less than hypnotizing.

There was certainly no shortage of wind yesterday to power the turbines. It felt like we were in ice-cold, hurricane strength winds (not that I would know what that felt like, but we were certainly struggling to walk)!

So despite our exciting afternoon, you can imagine how pleased we were to come home, get the fire going, and watch Rudolph the Red Nose Reindeer with Lukas. Adventures are great, but there truly is no place like home.
Posted by Liz Kraft at 12/10/2007 11:40:00 AM

At first I want to say that your article was very interesting and I enjoyed it. Your all pictures were very good. Good job :)