The wind was blowing something fierce in old city center of Middelburg, but with nightfall (at 5:00 PM, mind you) came the sound of church bells, and although their familiar song made me feel warm inside, I couldn't put my finger on the exact melody. It was the Carol of the Bells, a song embodying Christmas spirit better than any other... how could I forget?

Adding to the city's holiday romance, both the old town hall and 17th century military hospital (known as the "Kloveniersdoelen"), were illuminated by soft lighting, lending the city an air of grandeur in its darkness.

Earlier in the day, I hosted a coffee morning and book swap here at the farm, and it was nice to be able to share this place (which we find so magical) with new friends. Then it was off to Sheri's house, a fellow American expat and Mom living in Middelburg. We had some interesting chats about America's increasingly fanatical bible belt (where she was born and raised), and the short road to "eternal damnation". In the end, we agreed that, violence and fanaticism aside, America is wonderful place, and one that we're both proud to call "home" (as far away as it might be).


But where is home, really? If it's something that follows around, like a giant tortoise shell, then it's here in Zeeland now, which is why we found ourselves 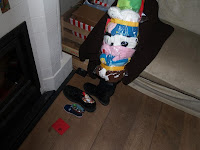 adopting a new (Dutch) tradition this year. Today is "Sinterklaas" in The Netherlands, which means that good children found their shoes and boots stuffed full of candy and presents from Sinterklaas' visit (the night before).


Adults (often) pack prank present for eachother, accompanied by a little poem. In Tobi's case, he 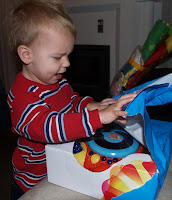 unpacked a pair of women's long underwear, before I revealed that I actually had a pair of men's underwear hidden in the other room. :-) It's a fun way of enjoying a bit of Christmas early. Almost like the old English 12 Days of Christmas... it's just before Christmas, rather than after.

And of course, it's a wonderful way to get the (older) kids to be on their best behavior. Afterall, if they haven't been good, they'll either get charcoal in their shoes, or they'll be taken back to Spain by Sinterklaas and his "Zwarte Pete's". As for us, it didn't change much, but it was fun to see (and experience) a new holiday tradition here in The Netherlands.
Posted by Liz Kraft at 12/06/2007 07:49:00 PM

Hi Liz, first, thanks for visiting my blog before, I didn't see it until today, just tells how often I check in there :)

It sounds nice with the Christmas spirit around, here in Brazil we have no such thing at all! I really miss that. I know exactly what you mean with " where is home" it can be hard to tell sometimes when you live in a another country. I think I feel that this is my home though,. Sweden is my second home, I haven't lived there for almost 10 years now so...

I like your blog, I'll come around again soon!Have a nice weekend!

Linda from My way to Freelance (current calling card as Blogger doesn't work at the moment. :)