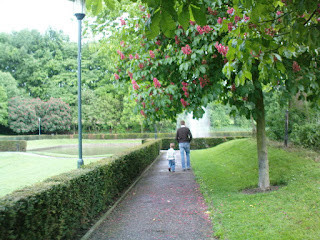 This was an altogether different kind of spontaneous adventure for us. I'm talking, the kind where you rush your child off to a doctor across the border, because you decide that he deserves to see a pediatrician if he's miserable and crying from the pain. And no - just this once - our local general practitioner wasn't able to make the decision for us (as is custom here in The Netherlands). In my opinion, we're perfectly capable of deciding when and under which circumstances our children need a "specialist".
Many Dutch will disagree with this, but old habits die hard, and I feel so much more comfortable visiting a doctor specializing in children when my kids are sick. Just call me crazy.
Granted, the Dutch medical system works for many people and has a lot of advantages, but too often we've walked out of the general practitioner's office - sick and miserable - without a single test having been performed. I suppose my upbringing in a overly-preventative, money-hungry, we'll-test-you-until-the-cows-come-home-so-long-as-you-can-afford-medical-insurance, healthcare system has left a lasting impression on me. :)
Long story short, we drove for two hours to get superior medical attention from a pediatrician in Aachen, Germany, specializing in the privately insured. She took tests, determined exactly what Lukas had (a severe case of Strep Throat), and prescribed medicine that could only be picked up from the pharmacy at 4 o'clock that afternoon. Which meant we had time to kill.
How did we spend that time? Exploring the nearby Dutch city of Gulpen, just 17 km down the road. It was there that we took a walk around the gorgeous pond, beneath the pink flowering 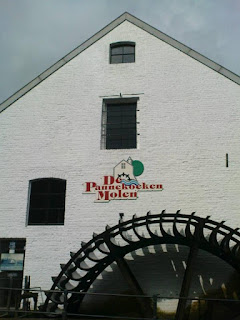 Hawthorn trees, ate some deliciously hearty Dutch pancakes at the historic "Pannekoeken Molen", and let Lukas tinker around on the playground for a bit -- allowing him to forget about his relentless burning throat, if only for a moment.
The moral of the story? You have to do what you feel is right for your kids... even if it involves ridiculously long drives for things seemingly absurd to others. Afterall, who knows where you'll end up, and what you'll discover along the way.
Gulpen - and surrounding South Limburg, with its endless rolling hills - brought us a bit of sunshine on a seemingly dark day. And Lukas? Lucky for us, he's feeling better already. 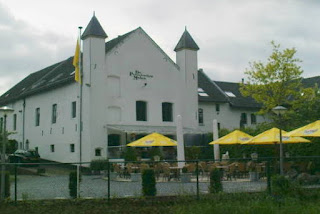 Good for you! Never, ever go against your instincts. I cannot tell you how many times I have taken our girls to the doctor when my husband thought I was being paranoid. Every single time that's happened it has been something serious...strep (twice), pneumonia (three times), a burst ear drum. I have even peristed when the doctor's themselves have said that nothing was wrong. No one knows your children like you do. And, if you are wrong and everything is okay, all you've done in waste a few hours in the name of caution..totally worth it.

Strep is very serious if left untreated so I'm glad that Lukas is on the mend.

I'm so happy to know that you found help for poor Lukas and his strep throat (that's painful), and that's he's feeling better now! Please give him a hug for me, and I'll send you my most positive thoughts & prayers that no one else in your house catches it!

I can't leave, however, without commenting, on your love/hate relationship with the American health care system.

While we might have our difficulties here in America, our system is still considered THE best in at least the Western hemisphere, if not in the entire world. And that's because it has been mostly privatized, so people can make choices as to their needs.

I've known since I was a kid that I would need to work in order to have solid medical coverage, so right when I got out of college, I got a full-time job with benefits. Jim knew the same thing, and he found a job with benefits, too, which has covered our whole family even though I no longer work full-time outside the home. That's pretty generous, and gives us access to any doctor we might need at any given point in time.

Granted, we can't go to the Mayo clinic, because that's considered the "Mercedes" of health care. Our insurance doesn't cover it, and we can't afford it. But we don't begrudge those who can because we know that at any given time, we have access to any other doctor or specialist within our system.

Coverage and access is there for everyone who works, and is even there for people who don't (our taxes pay for Medicaid for the uninsured). Again, it's not a perfect system, but people make choices. If they go into business for themselves and don't have a plan for insurance coverage then yes, they will have a harder time. Maybe one day we'll figure that one out, but again, they made their choice knowing our system, right?

You mentioned in your blog that our system's preventative. Actually, it's really not and that's part of the problem. It's too reactive and while it's great at fixing, it's not great at preventing (e.g., the obesity problem, etc.) I think Europe kicks our butt in that department.

However, having lived in Europe myself and seen people wait MONTHS for specialists (often succombing to their illness during that wait-time), I say proudly that I'll take the American system ANY day (and I think they would, too).

It's been miraculous for both our immediate, and extended, family (e.g., our family history with colon problems, your Mom's cancer, Austin's encephalitis, day-to-day ailments for which our doctors bring us aid and comfort at a moment's notice).

Well, that about covers it. I just felt the need to talk to you about this because we Americans often fall prey to the negative sentiments expressed by people who don't enjoy the benefits of our culture. I get the sense that others try to make Americans ashamed of who we are and what we have; yet, enjoying the benefits of a free society is nothing to be ashamed of. As I mentioned, we're certainly not perfect and have a LOT to learn in many ways, but we should at least appreciate and be proud of the things we do well.

Good for you! DOn't feel guilty. I am an expat and struggle when I get sick here in Holland, too. What to do? You have to learn to trust your instincts here because the system is different. THat is why I spend three months in Texas in the winter checking out every possible thing that can go wrong with me before I return for nine months in Holland which I dearly love. Just don't trust the system.

No not all Dutch are happy with this system. Elke was sick too and when her fever came back with fewer days of no fever in between, I went to our female husiarts (we have 2: aman and a women). She did not listen to my concerns (Elke had a fever for about 8 weeks, first every 5 days, then 4 etc) and shipped me of with nose drops. A week later Elke had had fever 3 times again and I lost it: I called the huisarts assistent, demanding an reference fot the pediatrician. I had to come by and luckely there was a substitute docter who took my concerns serisuesly. An hour later we where in hospital getting bloodwork done and the made an x ray of her lungs. The blood was inconclusive: cold be virus, could be bacteria bur because of the fevers we got a stronger antibiotis, just to be sfae. Two datys later we had an different child: happy, playing and no more rebound fevers!

So: be pushy, don't be polite when you think somethings wrong! Or go to Germany;)